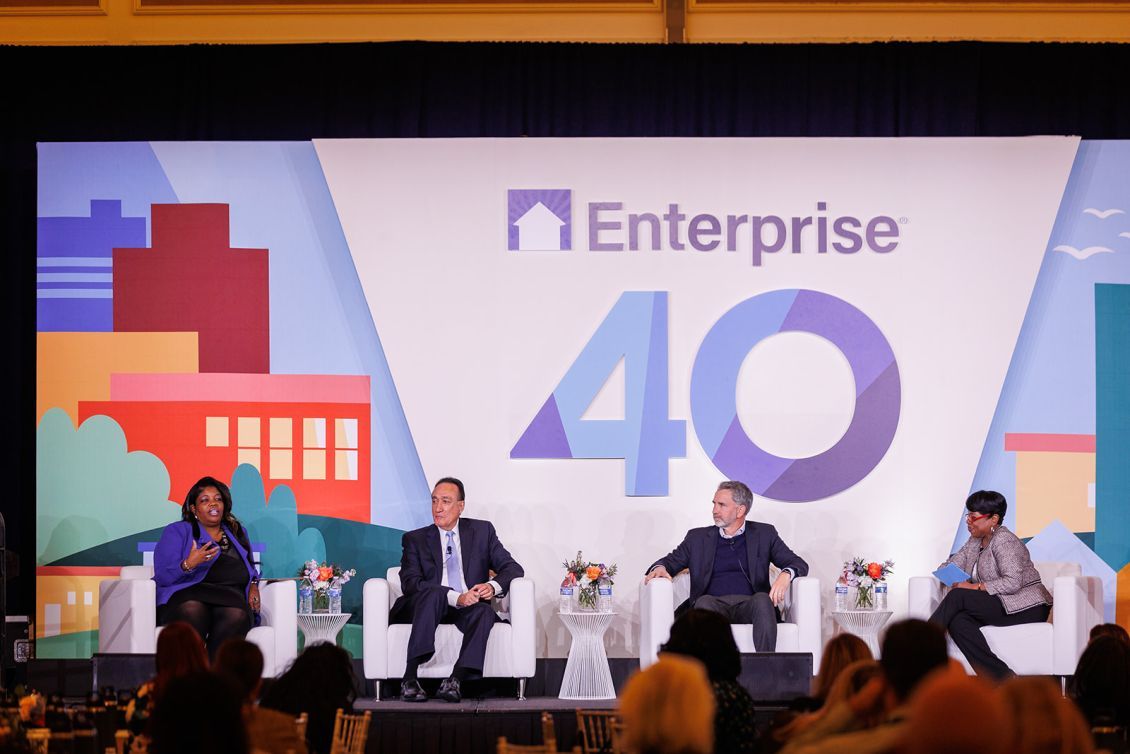 For more than half a century, the United States has helped millions to become homeowners, allowing a large segment of our society to build wealth and stability through a system of tax breaks and incentives. “But what about everyone else?” asked Lori Chatman, Enterprise’s interim co-CEO and president of the Capital Division. “An increasing share of Americans can’t become homeowners and there are others for whom it just doesn’t make sense.”

In a wide-ranging conversation, the panelists discussed ways to create new pathways for renters to build wealth and financial stability over the long term. They also explored the return on investment for increasing the affordable rental housing supply, as well as societal perceptions of wealth and homeownership. “We have to tackle perceptions within our society about the value and worth of a rented home,” Chatman said.

Chatman stressed that a disproportionate number of Black and Latino households have been excluded from the wealth building that typically accompanies homeownership. Homeowners are on average 40 times wealthier than renters, according to the 2019 Survey of Consumer Finances, and a significant portion of the 40 million American households who rent are either Black or Latino.

Here are key approaches and imperatives raised by the panelists:

Creating new models for upward mobility that include renters: Cisneros, who stressed the need to increase our supply of rental housing, said we must also create a model that will provide renters new pathways to upward mobility and economic success. He pointed to three factors in the period after World War II that led to the growth of the middle class: The G.I. Bill, a law that provided funds for veterans to attend college and made it easier for them to buy a home; minimum wage and strong labor protections for workers; and increased homeownership. “We have to either create a new model or recognize we have to adopt these kinds of pathways into the rental structure if we want to accomplish the same objectives,” Cisneros said. This new model could include more access to education and training opportunities attached to housing, he said, citing the Campus of Learners initiative during his tenure as HUD secretary. “For scalability it’s an investment issue, but also a governmental responsibility,” he added.

Redefining “wealth” and including people in the conversation: Dr. Tiffany Manuel, a former Enterprise leader who founded TheCaseMade, interviewed affordable housing residents in four states asking: “What does wealth mean to you?” Instead of responding in financial terms, most people talked about “peace of mind,” stressing that their primary concern is the amount of debt they carry from student loans and credit cards. The interviews, which informed strategy for the launch of the Renter Wealth Creation Fund, found that “homeownership is often not even seen as a possibility, given debt levels,” Manuel said. “It’s so important to have these conversations with people in the room,” she said, adding that she sums up her community engagement philosophy this way: “Nothing about us without us.”

Building wealth through community ownership: Private equity can be a force for good in helping to cultivate upward mobility for low- and moderate-income families, the panelists said. With each affordable housing development, “you have to build a parfait,” Tangherlini said, and make “room in the capital stack for the renter and the community.” One idea, he added, is to include a community equity endowment in which a portion of the capital stack is reserved for the direct financial benefit of residents and community.

Equating ROI with social good: Investing in partnerships that connect affordable housing with schools and community colleges can lead to significant social returns, TheCaseMade’s Manuel said. The opportunity for social return can be extended through education and job training, creating additional pathways to wealth creation, she said. Furthermore, the best return you hope to achieve by investing in affordable housing is gained through improving the quality of life of tenants and improving the quality of the communities in which an investment is made, Tangherlini said. And while government is responsible to help provide some of those resources for renters and communities, it’s also the investor’s responsibility to understand what they are investing in, he said. “They’re not investing purely in buildings and a theoretical rent stream. They’re investing in communities. They’re investing in people.”