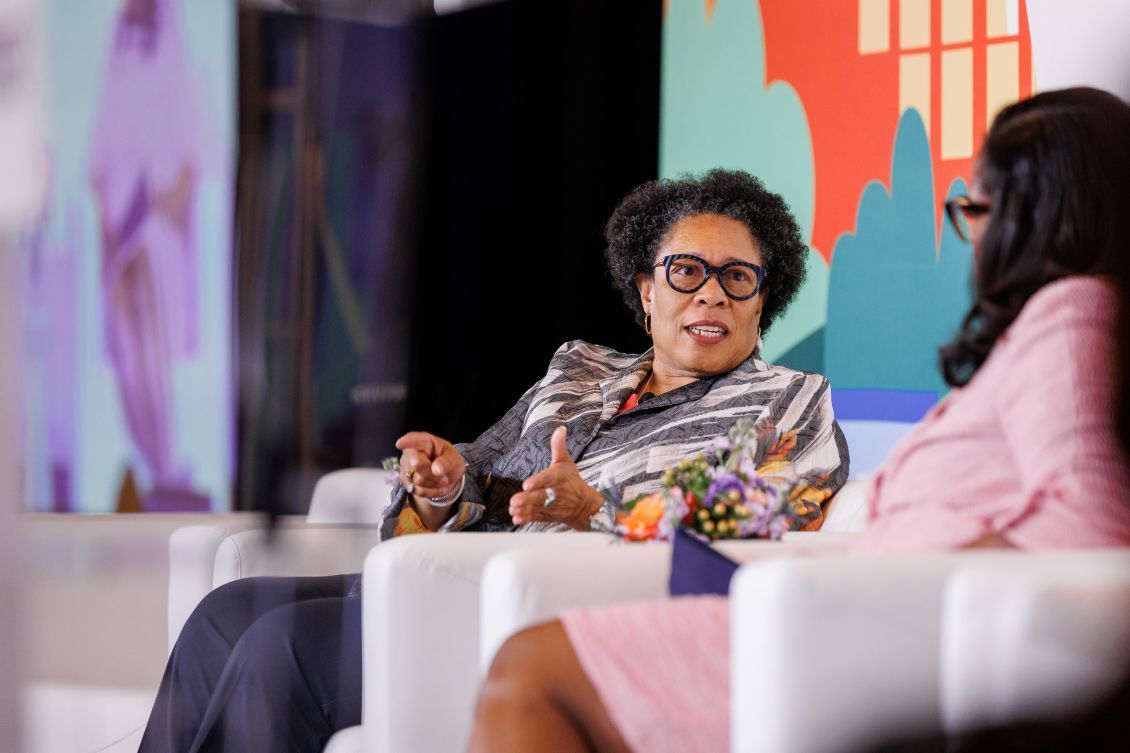 “We’re going to talk about what work we need to do to strengthen our communities. And so today we want to talk about accelerating systemic change.”

“We want you to be our partner,” Secretary Fudge told the audience of funders, public agencies, investors and community development partners gathered in Washington, D.C., on October 20 for Enterprise’s 40th Anniversary celebration. “I need you to use your power and use your voice to help us do the work we need to do.”

Enterprise’s Waggoner opened up the conversation asking Secretary Fudge about how her background and experience – as the second Black woman to lead HUD – factor into the department’s priorities and goals.

Secretary Fudge said Patricia Harris – the first Black woman to serve in a presidential cabinet – was a role model and helped her chart a path to success. Harris, who was HUD secretary under President Jimmy Carter, “grew up like I grew up,” Fudge said. “She grew up in communities where our parents weren’t well educated, where they just worked hard every day, where we could only live in certain communities.”

“Neither of us have every forgotten where we come from. And that’s what makes this work important to us.”

Rather than taking a top-down approach, Secretary Fudge explained that she puts people at the center of all the work she does “We need to be stronger,” she said. “For decades and decades, we have neglected citizens by not building housing.”

As gentrification and real estate speculation threaten to drive up prices, Secretary Fudge also stressed that preserving affordability is crucial to providing stability for millions of American families.

“We have to find ways to not only preserve housing but to preserve the people who live in that housing. We have to build neighborhoods,” Secretary Fudge said, and she pointed to inflation and its impact of families trying to pay rent every month.

“We sit and we talk about inflation. Every day, people keep talking about the price of gas and it is high, no question. But housing is the main driver of inflation in this country,” Secretary Fudge said.

“Can we get a round of applause on that?” Waggoner urged the audience.

The secretary also touched on the need for more investment to rebuild after climate disasters and to produce more climate resilient housing, as communities face ongoing threats from extreme weather events. She noted that people and communities are still building back from Hurricane Katrina that devastated the Gulf Coast 16 years ago, but that government is making relief funding more flexible to help low-income families recover.

“People who have money are dealing with their insurance companies right now,” Secretary Fudge said. “People who are in need are waiting on us to help. We have to be able to show this country that government can work for them.”

She also pointed to some recent successes, including the distribution of 35,000 emergency vouchers to help prevent homelessness, and another 20,000 such vouchers in the pipeline.

She added that HUD is working closely with community development financial institutions and community banks to make sure they have access to capital to make progress on housing and equity, and to find ways for direct funding sources to people and communities.

On the topic of fair housing and enforcement of the Fair Housing Act, Fudge said she is focused on several key areas, including offering more resources and incentives for landlords to provide access for people with Section 8 vouchers. She explicitly called on more communities to pass laws banning source-of-income discrimination, which Waggoner rightfully identified as “a proxy for racial discrimination.”

As the conversation came to a close, Waggoner asked the secretary about what people in the room should take away from their conversation in the days and weeks following the conference. And Secretary Fudge took the opportunity to put the focus back on the people she has served throughout her career.

“We have to stop looking at poverty and homelessness and all of these issues from 30,000 feet,” she said. “Go to a public housing site or go to a Section 8 home. Because if you see how people live, it will give you enough fight at least to let people know that you really do care about them. That's what this is all about. We have to be a voice for people with no voice.”