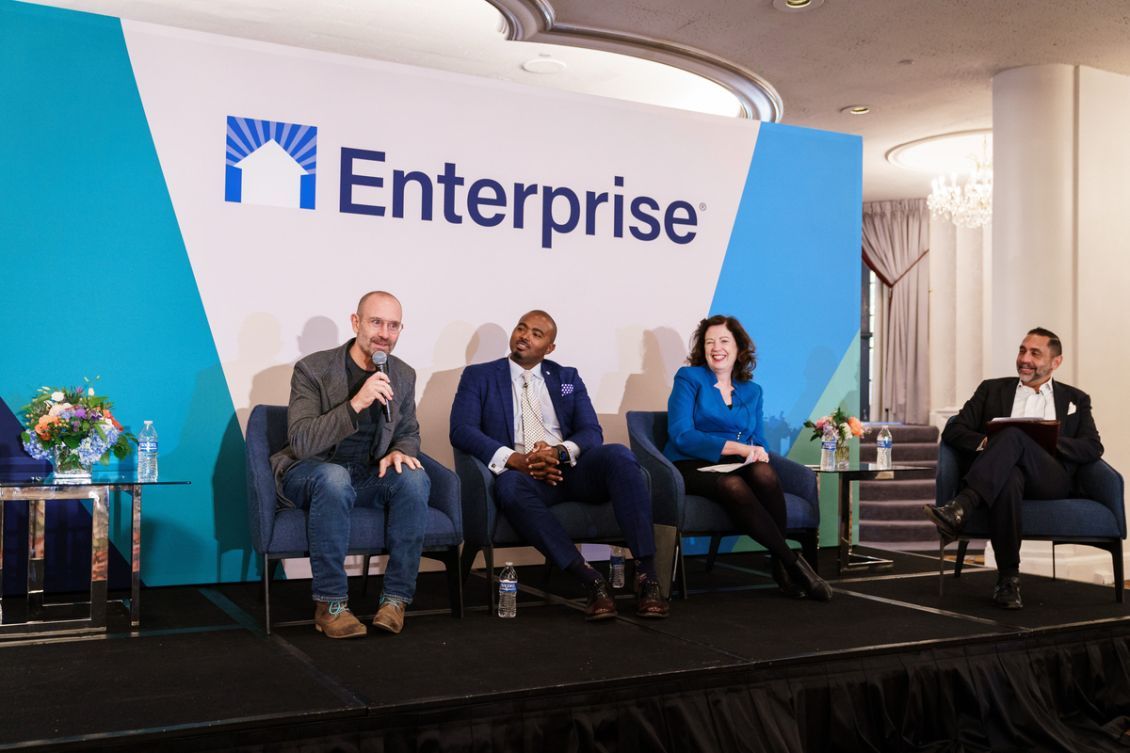 In the U.S., the housing sector accounts for roughly 20% of all greenhouse gas emissions. And affordable housing developers face the steep challenge of building energy-efficient homes in a cost-effective way. Despite hurdles, engineers, funders, and developers are uncovering and applying solutions that point to a greener and more sustainable housing landscape.

These were some of the topics raised during a panel discussion at Enterprise’s 40th Anniversary National Conference. The panel was hosted by Carlos Martin, who is project director with Harvard's Joint Center for Housing Studies and the Rubenstein Fellow at the Brookings Institution. Panelists included Eileen Fitzgerald, formerly head of housing affordability philanthropy at Wells Fargo, Paul Irons, managing member of New Orleans Restoration Properties, and Rick Tallman, founder and partner of Renova Capital Partners and executive vice president of special projects at Sustainable Living Innovations.

Here are highlights and key takeaways from the discussion.

Carlos Martin: “Twenty percent of our greenhouse gas emissions come just from our housing. And the U.S., of course, is the largest emitter on the planet, which means that that emissions from America's housing are equivalent to Brazil's greenhouse gas emissions. So not only do we have to decarbonize, but we have to do it in a way that makes sure that those at the lowest income aren't bearing the burden of those costs.”

“And speaking of low-income households, remember that about 35 percent of people in this country are experiencing energy insecurity right now," Martin said. "These are some of the challenges. Now let’s talk about solutions.”

Paul Irons: Speaking about Grove Place, a project in the Hollygrove neighborhood in New Orleans: “This project is a block and a half from the house we grew up in. It had 12 existing buildings on the site. We’re building efficiently, with energy consumption in mind, but also with the health of the tenants in mind so we can create a healthier space for them to live and hopefully help facilitate that quality of life that everybody wants and desires.

“We’ve faced challenges to retrofitting the buildings to get them to that efficient level that they need to be in. And even though it's necessary, it is difficult. And I would say that we're not energy efficient experts, but what's made this a necessity is equity. The conversation is equity,” Irons said, adding that his organization has found “unique ways” to renovate for energy efficiency while preserving historic elements. “How do you take that thing that's already there and make it as efficient as if you were building new?”

Eileen Fitzgerald: Green energy and job training need to go together, said Fitzgerald. Discussing work that Wells Fargo is doing with Inclusiv, a CDFI intermediary, to invest in green energy while also supporting job training efforts, “They are working with community development credit unions, who are then working with contractors of color to bring a responsible sustainable financing option for solar installation, starting in Arizona,” she said. “There's also support there for contractors to grow and to get trained.”

A Pathway to Affordability

Rick Tallman: Speaking about Sustainable Living Innovations’ development of a high-rise in downtown Seattle: “This is the world's first zero net energy high-rise apartment building that's ever been built. It means that 100 percent of the energy in that building is generated by the project.

"Green is more than sustainable, durable and efficient,” said Tallman. “Green is a pathway to affordability. And the way to keep track and keep score is by dollars and cents. The bottom line is if you're going to try to build more affordable housing, you should just build more housing that's affordable. We don't have to charge as much rent because it costs us so much less to operate the building. It's as simple as that.”