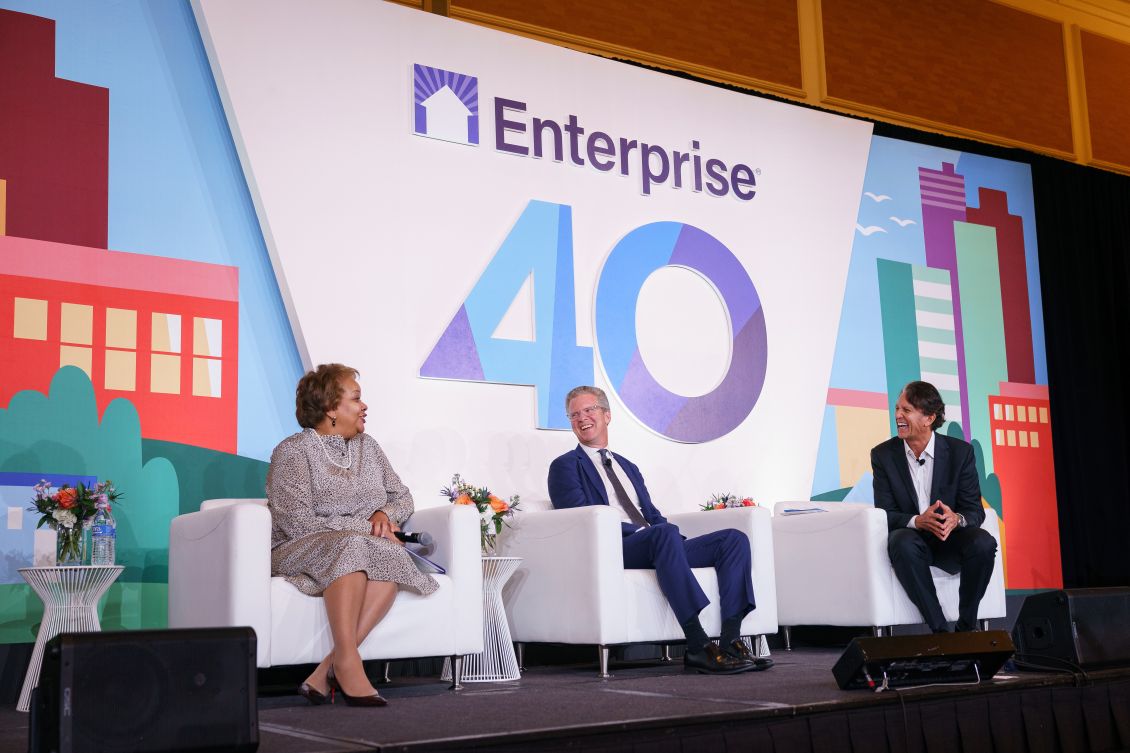 How can we make affordable homes more available across the country? How can we create a more equitable system for homeownership – and build more affordable homes in areas with the greatest economic opportunity? What’s the best way to support people in homes and communities that are more prone to natural disaster?

These were some of the crucial questions raised by Enterprise Board Chair Rick Lazio during a wide-ranging panel discussion at Enterprise’s 40th Anniversary National Conference. Lazio, a former member of Congress, moderated the conversation with panelists Sandra Thompson, director of the Federal Housing Finance Agency, and former HUD Secretary Shaun Donovan, a senior fellow at the Ford Foundation.

Here are highlights of their conversation.

What Superstorm Sandy Taught Us

Donovan, a native New Yorker, pointed to lessons that have emerged over the past 10 years since Superstorm Sandy and more recent storms. “It’s not an accident that low-income people are hit the hardest,” he said. “Because whether you think about the Lower 9th Ward in New Orleans, whether you think about the manufactured homes that are so often in harm’s way, the lowest value homes and communities are often the most environmentally challenged,” he said. Until we can build more affordable housing in neighborhoods of opportunity, we're not going solve this problem at scale, Donovan said, adding: “We've got to have the courage to say, ‘There are places where we shouldn't be building or shouldn't be building as much.’ "

Thompson said her agency, which provides oversight of Fannie Mae, Freddie Mac and the Federal Home Loan Banks, is looking at racial equity issues as they relate to “not just appraisals, but homeownership period, and rental ownership as well.” The FHFA is working to remove bias from the home appraisal process, noting that Fannie and Freddie have implemented “desktop appraisals,” which allow appraisers to access relevant data and complete the process without going into the home. “We're taking a close look at the data, the process, and then the results,” said Thompson.

Why We Need a Zoning Movement

“We’re locking low-income people and people of color out of places of economic opportunity. It isn't just that housing's not affordable, it's also especially not affordable in the places where people can find the jobs that could transform their lives,” Donovan said. To address worsening “geographic isolation,” Donovan pointed to “bright spots” such as the elimination of single-family zoning in Minneapolis, adding: “We need a movement around zoning in this country that is much, much bigger if we’re going to solve the problem.”

Both Fannie Mae and Freddie Mac now incorporate rental payments in their underwriting calculations, Thompson said, urging others to follow suit. “You’ve got people who are paying their rent every month and they're paying it on time. And some rents, especially in a place like D.C. and New York, are very, very high,” she said. Renters have “demonstrated their willingness to pay and their ability to pay. So why shouldn't that be incorporated into an underwriting calculation that can help a credit score?” Thompson favors encouraging positive rental payment reporting in many of the multifamily properties financed by Fannie Mae and Freddie Mac so people can start building credit. In a very short period, “thousands of people have moved from credit invisible to having a positive credit score,” Thompson said.

The Climate-Resilient Future is Now

“We can see a moment where affordable energy is going to be available through electrification of homes,” Donovan said. With the incentives in the Inflation Reduction Act, this is an opportunity to ensure people with lower incomes can save money on energy going forward. “You have to put the money in to bring the home up to code – heat pumps, weatherization, all those pieces,” he said, cautioning: “My worry is if we don't move quickly to build the systems where low-income communities can benefit from all these tax credits and new technologies, we could end up with energy apartheid where you have wealthy people able to lower their bills and lower pollution in their neighborhoods.”