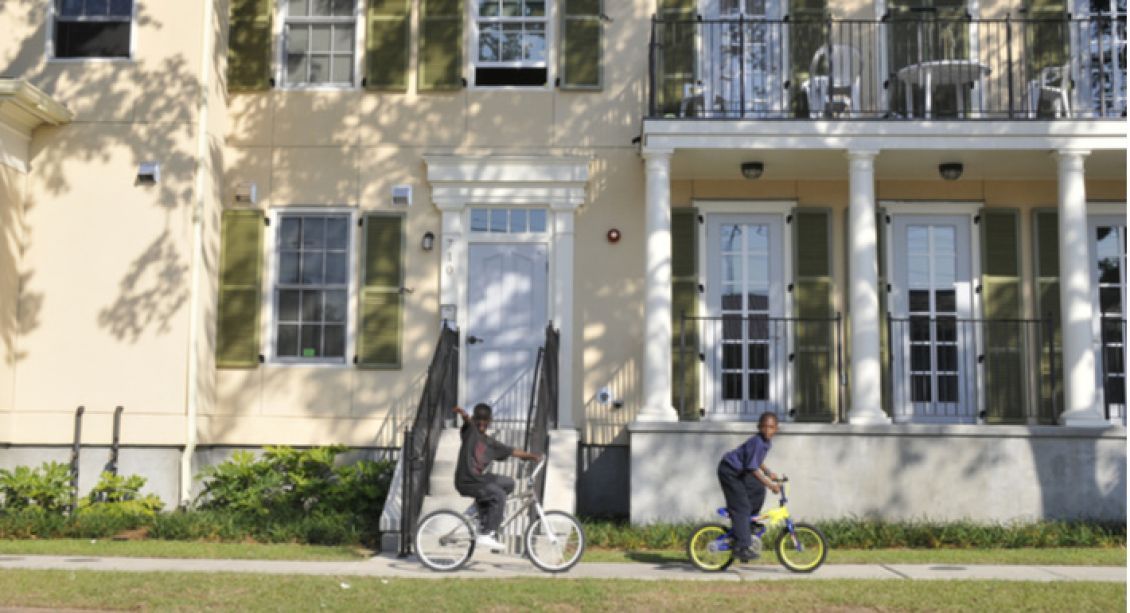 The U.S. may be facing its worst wildfire season in a century, concurrent with hurricane season and intensified heatwaves. Only halfway through 2021, eight separate billion-dollar weather and climate disaster events have already occurred in the U.S., leaving devastated communities behind.

As communities suffer multiple events in shorter periods of time, the number of impacted housing units, especially affordable multifamily housing units, is staggering. A recent study by Climate Central estimates that “by 2050, virtually every coastal state is expected to have at least some affordable housing exposed to more than one coastal flood risk event per year, on average—up from about half of coastal states in the year 2000.” Yet nearly 200,000 federally subsidized rental housing units are located in floodplains. Another report from NYU Furman Center projects that 30 million people live in the combined 100-year and 500-year flood plains, mostly low-income and communities of color.

These deadly disasters disproportionately affect underserved communities and people of color the most because of our country’s legacy of discriminatory housing and economic practices. The combined impact of legacy land use and financing policies such as redlining have marginalized communities politically, economically, and structurally through increased exposure to climate risk and left them with fewer local resources and capacities to either mitigate the risks or fully recover in the aftermath of an adverse event. Too often, these inequities and the overlapping risks they present persist long after the initial storm, fire, or pandemic.

The legacy of discriminatory practices in U.S. housing policies has been a fundamental problem when considering the generational impacts it has had on a community’s immunity to climate shocks. When a community has been undermined and traumatized, especially socially and economically over a prolonged period, the ability to survive and thrive becomes compromised even as the exposure to risk increases.

For instance, without intervention, the increase in population, urban densification, and climate change will only amplify the phenomenon of urban heat islands, which experience significantly higher temperatures than other areas. The CDC reports that heatwaves are the deadliest of the climatic disasters facing cities, which affect low-income and people of color the most. For example, Black residents make up 50 percent of the heat-related deaths in New York City, despite making up 25 percent of the city’s population.

At-Risk Communities are Less Prepared to Deal with Climate Shocks

Besides being more likely to live in physically vulnerable areas with greater natural hazard risks, residents of these communities also tend to live in lower-quality homes that are less stable in the event of extreme weather events. These same individuals tend to be less likely to have the resources necessary to prepare for a disaster and to lack the savings needed after disasters strike; as a result, they take longer to recover—if they recover at all.

According to the federal U.S. Global Change Research Program’s Fourth National Climate Assessment, climate risk prevention efforts can reveal existing inequalities. While better-resourced communities have access to stronger, more resilient infrastructure and mitigation initiatives to address climate hazards, smaller or under-resourced communities lack the capacity and means to put in place a robust mitigation response. Even at the household level, some property owners can afford retrofits to make their home more resilient to climate shocks, such as elevations to protect against flooding. The report refers to these inequalities in infrastructure improvements and climate resilience investments within communities as “green gentrification,” in which property values rise and low-income residents are pushed out.

The inequities in disaster response are also reflected through various federal aid programs. A 2019 study found that the rate of approval of FEMA grants was much lower among homeowners living in areas with larger proportions of nonwhite residents, lower incomes and credit scores. Similarly, a 2018 research article found that white residents in counties with significant disaster damage that received FEMA aid saw their personal wealth jump years later, while Black residents generally lost wealth.

For all these reasons, it is important to have an environmental justice frame when considering policies, programs, and congressional actions to address the climate crisis. Despite growing interest and commitment, our housing, infrastructure, and regions are not mitigating or adapting at the necessary pace of change. It is time for America to invest in modern infrastructure that is built to last.

As the leader on climate resilience in the affordable housing industry, Enterprise aims to address these gaps to promote social and economic prosperity. Through our Building Resilient Futures initiative, we are working to ensure that sustainable, resilient, affordable housing becomes the norm and that communities are equipped to withstand and recover from disasters. We also call on federal policymakers to rectify existing inequities in climate policy and ensure all future disaster recovery and mitigation efforts support the communities most in need, by doing the following:

We encourage all who believe in creating a just society to read, discuss, and share the PARE blog series as we learn and act to address the impacts of housing policies on racial equity in America. Check out our blog and subscribe to our daily and bi-weekly policy newsletters for more information on Enterprise’s federal, state, and local policy advocacy and racial equity work.