This blog post is part of our blog post series, Policy Actions for Racial Equity (PARE), which explores the many ways housing policies contribute and have contributed to racial disparities in our country.

I closed part 1 with the DAWES Act and some information on the historical trauma that we as Natives in both Canada and the United States have experienced unilaterally through the government assimilation experiment known as the “Boarding School Era.”

A few days after the previous blog was published, the remains of 215 Native children — some as young as three years old —  were discovered at the Kamloops Indian Residential School, which has led to the discovery of more remains found at residential boarding schools throughout Canada and the United States.

This is deeply personal for many of us, including my partner.

Growing up, she heard stories of her maternal uncle Vernon who never came home from the boarding school that he and his siblings attended in Michigan. On the last day of her first year at school, Vernon's baby sister Sylvia was waiting for her older brother.

When she asked a nun about him, the nun responded, “He died. You can go home now,” and walked off. 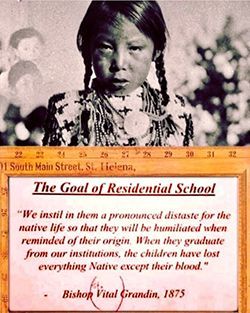 The remains of 4,100 relatives have been identified in Canada alone, and we’ve just begun to search.  Scholars estimate that the true number of children who died either in or because of these institutions in the United States and Canada is closer to 40,000.

Native students fought back against abuse and assimilation forced upon them at boarding schools , but the legacy of these schools is profound. Despite the horrors endured in that Michigan boarding school, Sylvia will tell you that she received a quality education allowing her to become the first college graduate of her family, with multiple degrees, at that.

To that our generation responds, “But at what cost?”

Trauma Seen Through the Lens of Language

The trauma that happened in our boarding schools affects all aspects of our life.  I took a Lakota language class at the beginning of the pandemic. During the class we were reviewing the days of the week.

This instructor had learned from his teacher the word Owanka Yujajapi for Saturday. This directly translates to “the day we wash the boards,” and he was going to pass this teaching on to the class.

I pushed back against this instruction, along with his teaching for Sunday, which was “anpetu wakan,” meaning “holy day.” These terms obviously came from our time in the boarding schools, which forced  children to serve as free sources of labor for both the schools and local communities.

My resentment of the Lakota word for Saturday, and my pushback against it, was supported by my classmates and ultimately my instructor. We settled on "anpetu sakpe" (“the sixth day”).

This is just one small example of how deep the legacy of the boarding schools has been on the Lakota language and on its people.

U.S.  Secretary of the Interior Deb Haaland, a member of the Laguna Pueblo Nation, has pledged to “address the intergenerational impact of Indian boarding schools to shed light on the unspoken traumas of the past.”

Her appointment is a momentous and historic moment. Never before has a Native American held a cabinet member position, much less the department that oversees and protects the country’s public lands and natural resources, tribal lands and treaties made with tribes.

As discussed through my blog posts, the Department of the Interior all too often is at the center of human rights violations against Native Americans, stealing land and inflicting trauma.

Kiowa Chief Lone Wolf had charged the Secretary of Interior with fraud citing violations of the Medicine Lodge Treaty of 1867, which stated that three-fourths of Kiowa adult males had to consent in any reduction of their reservation lands.

This case ultimately ended up in the United States Supreme Court, where the “Indian playbook” was brought out due to the obvious validity of Lone Wolf’s charges.

The Court cited language from Cherokee Nation v. Georgia of the Marshall Trilogy, stating that the Kiowa, like the Cherokees, were a dependent nation with a relationship to the United States like that of a "ward to its guardian."

The court ruled that treaties between the United States and Native American tribes may be broken unilaterally by Congress under its “plenary power.” The decision presented American Indians as inferior in race, culture, and religion.

This marks a dark day in Native American history and serves as a reminder that even when we play by “their” established rules, this game, this judicial system, wasn’t designed to give us a fair fight. Legally, scholars have compared Lone Wolf to the infamous Dred Scott case and have universally condemned the decision.

The original language had called for the Secretary of Interior to be authorized to grant citizenship to those Indians who applied, but this was removed by the Senate and the blanket grant to all Indians not previously made U.S. citizens was included.

So, without consultation with Indians, the U.S. Government simply attempted to force citizenship upon us, following the pattern of the Europeans attitude that they know what is best for the Indians, regardless of what we want.

The importance of this amendment is illustrated by the very brief legislative history that reveals the only floor discussion on the bill was one question from Congressman Garrett from Tennessee, who asked Snyder if this bill meant that Indians could vote.

Snyder assured him and the rest of the chamber that it did not and that this was still controlled by the states, when he answered: “[I]t is not the intention of this law to have any effect upon suffrage qualifications in any State.”

Historical records do not contain any explanation for why Mr. Snyder felt that this unsolicited grant of citizenship should not include the guarantee of the right to vote, but his statement does make it clear, along with the removal of the word “full,” that this Indian citizenship was something less than that enjoyed by non-Indians.

In fact, it was not until 1948 that the last state removed the prohibition against Indians voting.

The passage of the Snyder Act was the beginning of government-to-government consultations, but, of course, we paid the price.  For Natives, protecting the sovereignty of tribal nations was, and is, a paramount political concern. 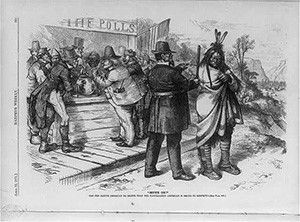 Many tribal leaders rejected the notion of being told they were now citizens of the government that had repeatedly committed acts of genocide against our people. The tension between sovereignty and enfranchisement persists to this day.

Our Onondaga and Haudenosaunee relatives have maintained their status as an independent domestic nation, despite repeated reminders that they are in a “guardian to ward relationship.”

In the U.S. Systemic racism has overlapped into all angles of Native Americans’ existence, including the Creator’s Game (Lacrosse).

in 2010, members of the Iroquois Nationals team were denied entry into England for the World Lacrosse Championship being held in Manchester, due to their use of Iroquois Confederacy passports, which have been in existence since 1927.

British officials advised the team that if the 23 players wished to enter the country they had to do so with a U.S. or Canadian passport.

They all rejected the option, saying it would be a strike against their identity, thus forfeiting the championships. In 2015, the same thing happened to the Haudenosaunee women’s team in Scotland because they too rejected using any other nation's passports.

They also believe it would be treasonous to accept citizenship from a group that views them as inferior with no right to the land.

As a Lakota living on land stolen through the 1851 Fort Laramie Treaty, I must agree.

Trusteeship set up as the result of policy in 1831 still saddles Indian lands with bureaucratic oversight and prevents Natives from using their land as collateral for borrowing. This makes homeownership almost impossible to achieve.

All these policies collectively impact a Native American’s ability to thrive, but new homeowners continue to pop up on trust land throughout Indian country every day.

Rural & Native American
Back to Top