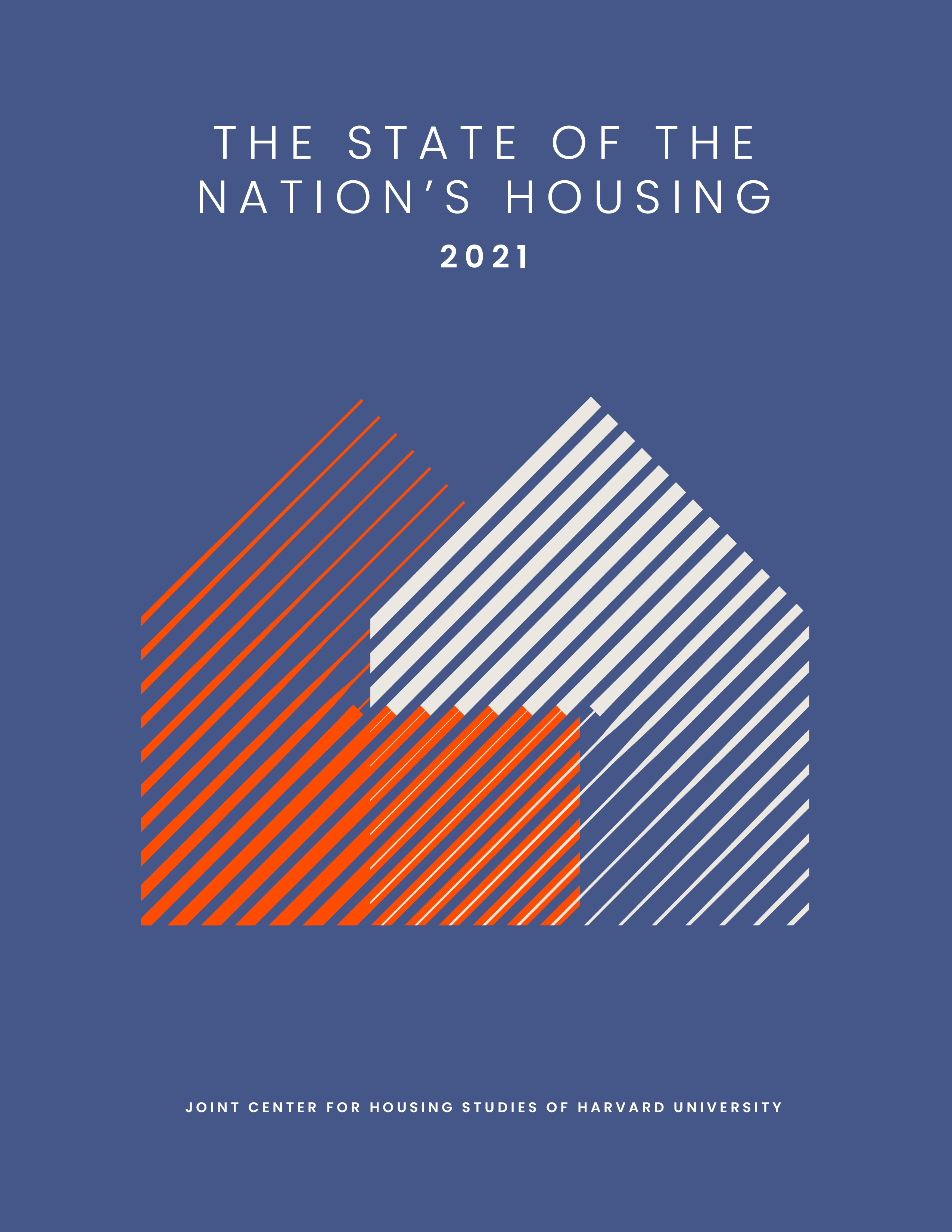 The Joint Center for Housing Studies (JCHS) at Harvard University today released its 2021 State of the Nation’s Housing report, providing commentary and context on the condition of housing markets after an unprecedented year of changes and challenges. The report makes particular note of the divergent trends among for-sale versus for-rent markets, with the former experiencing soaring prices amid historic supply shortages, while the latter grapples with billions in back rent owed and the growing risk of an eviction crisis among renters who lost income during the pandemic.

Signs of an Uneven Recovery in Housing Markets

As the economy continues to crawl back from the last year’s pandemic-induced shocks, housing markets are similarly showing signs of recovery. Nationally, house prices, homeownership rates, and levels of new construction all rebounded quickly from their initial drops in Spring 2020, even reaching new highs in some metro areas.

Record-low interest rates coupled with increased demand for larger homes – as many households braced for long-term remote work and school scenarios – exacerbated already limited inventories of for-sale stock, with the estimated time to sell a home falling to its lowest level in the nearly 40 years of tracking this metric. In response, starts of new dwellings picked up late last year, though not enough to fill the pre-pandemic gap in supply relative to long-term demand. Indeed, even post-pandemic, the outlook for new construction remains uncertain, as the persistently high cost of labor and materials – including land, especially in jurisdictions with restrictive zoning and development policies – limit opportunities to build all but the most expensive housing.

Conditions in rental markets, meanwhile, have been slower to recover, with renter households bearing a disproportionately greater share of employment and income losses due to the pandemic. According to the U.S. Census Bureau’s Pulse Survey, as many as one in five renters reported being behind on their rental payments over the last year. While eviction moratoria and federal relief payments helped some renters remain housed despite their financial struggles, many others were still left with no choice but to leave the rental market. Property owners were thus dealt a double blow from both increased vacancies and reduced receipts on occupied units.

Even as the latest round of federal rental assistance slowly makes its way to households in distress, concerns about whether it will arrive in time to stave off the long-expected wave of evictions have grown, particularly with the CDC-ordered national moratorium due to expire at the end of this month. The fear is greatest for lower-income renters, who are more likely to be at risk of eviction and less likely to have resources or alternative options on which to fall back.

For all the ups-and-downs of housing markets over the last year, one long-standing trend has remained consistent – households of color enduring greater housing challenges relative to white households. The greater economic toll of the pandemic on Black, Indigenous, and other people of color (BIPOC) exacerbated many of these existing inequities, adding urgency to efforts to address racial disparities in housing practices and policies at the local and federal level.

The JCHS report notes that housing cost burdens – the share of households spending more than 30 percent of their income on housing – were highest among households of color before the pandemic. Indeed, more than half of Black (54 percent) and Hispanic (52 percent) renter households were cost burdened in 2019, versus 42 percent of white renters. Low-income renters of color were even more likely to be cost burdened, with over 83 percent of those earning less than $25,000 spending high shares of their income on housing.

Similarly, the homeownership rates among households of color have remained well below those of white households throughout modern record-keeping, even after accounting for differences in age and income. While the overall gap in homeownership rates between Black-White and Hispanic-White households has narrowed slightly in recent years, the largest differences remain among those in their prime homebuying years (35-44 years old). Even if households of color make up some of that ground later, they will have missed a chance to growth more wealth from their housing in those earlier years.

A series of web-based tables provided with the JCHS report detail these implications, showing persistent differences in wealth and cash reserves among households by race and ethnicity over time. Such disparities are both symptoms and causes of housing inequities, with lower wealth limiting options for households of color to build credit and qualify for a mortgage in the future, as well as the opportunity to pass on wealth to their descendants.

The report completes each of its six sections with a look forward on what to expect for different aspects of housing markets in the months and years to come. While the future course of the pandemic itself makes forecasting particularly challenging this year, the general sense from these discussions is one of continued mixed outcomes. As the report notes:

For households with secure employment and good-quality housing, their homes provided a safe haven from the pandemic. But for the millions of households that lost income and are still struggling to cover their housing costs, their situations are anything but secure. These disparities are likely to persist even as the economy recovers, with many lower-income households slow to regain their financial footing and facing possible eviction or foreclosure.

Key to shaping these future outcomes will be decisions on what, if any, major policy interventions to enact to increase the supply and affordability of housing, address long-standing racial inequities, and increase the resilience of dwellings and communities to climate change and other external shocks.

Subscribe to our daily Today In Housing newsletter and visit the Enterprise Blog for more information on how Enterprise is working to make home and community places of pride, power and belonging, and platforms for resilience and upward mobility for all.