Ron Terwilliger is chairman emeritus of Trammell Crow Residential Company, a national residential real estate company and the largest developer of multifamily housing in the U.S. for several decades during his tenure as CEO.

Ron’s philanthropic contributions include a $100 million legacy gift to Habitat for Humanity International. He is prepaying $30 million of that gift to create the Terwilliger Center for Innovation and Shelter to bring market-based solutions to low-income families worldwide to improve their housing conditions. He has also pledged and contributed more than $50 million to the U.S. Naval Academy. Ron’s $5 million gift to the Enterprise Foundation created the Enterprise Terwilliger Fund – targeted to create 2,000 affordable homes annually. He also made a $3 million gift to Enterprise to provide resident services to low-income families. Ron established the ULI Terwilliger Center for Housing with his $5 million gift to the Urban Land Institute.

Ron was inducted into the National Association of Home Builders Hall of Fame in 2008. In 2009, he was honored by the National Housing Conference with the Housing Leader of the Year Award. In 2009, Ron was honored by the United States Naval Academy as a Distinguished Graduate for his lifetime commitment to service, personal character, and distinguished contributions to our nation. In 2012, Ron received the National Patriotism Award by the National Foundation of Patriotism. Ron was the recipient of the 2013 ULI J.C. Nichols Prize for Visionaries in Urban Development.

Ron was selected for the Prestigious Horatio Alger Award – Class of 2014, bestowed upon individuals who have succeeded in spite of adversity and who are committed to supporting young people in pursuit of increased opportunities through higher education. He received the 2017 Edward W. Brooke Housing Leadership Award for his outstanding contributions to elevating the national discussion on rebalancing federal housing policy to better serve the needs of low-income households. Ron was honored in 2021 by the Navy Supply Corps Foundation as a Distinguished Alumnus.

Ron is an honor graduate of the United States Naval Academy. After serving five years in the Navy, he received his MBA degree with High Distinction from the Harvard Graduate School of Business where he was elected a Baker Scholar. 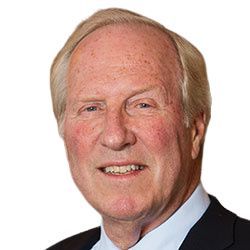