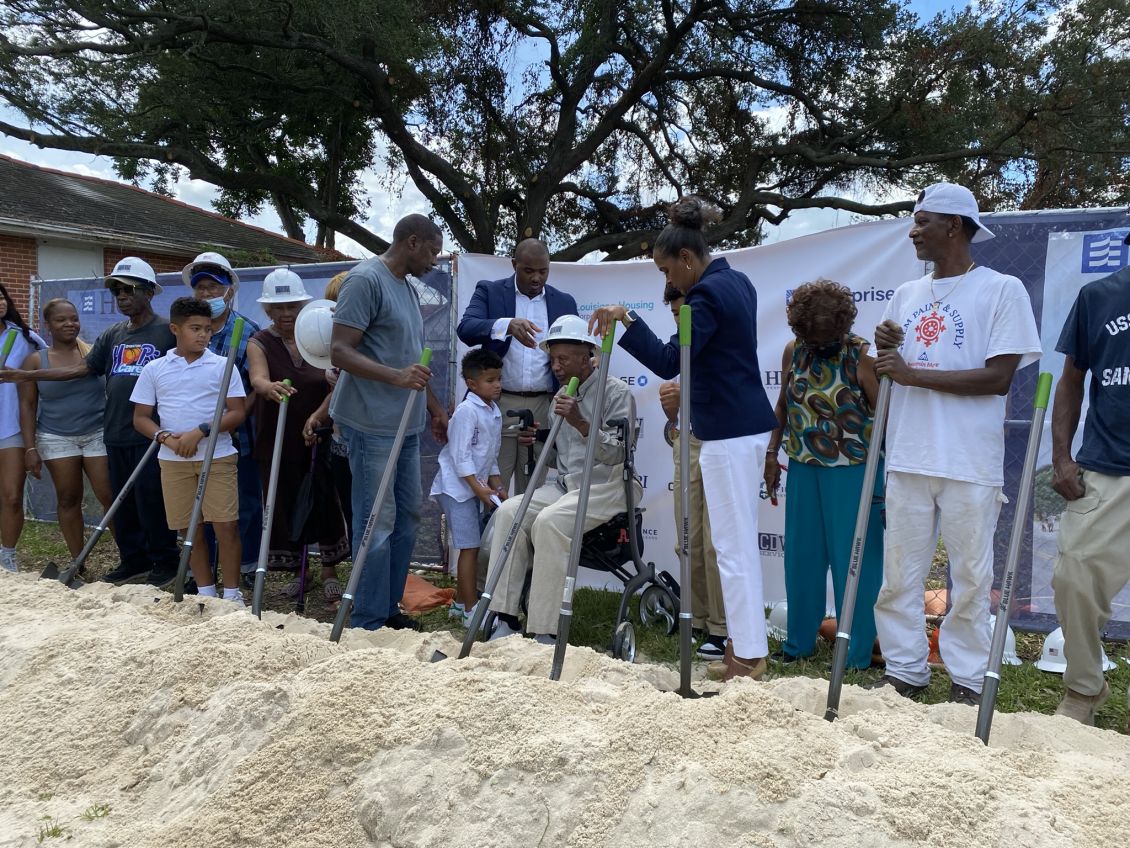 Three generations of local developers in New Orleans break ground on an affordable community that will transform the city's Hollygrove neighborhood.

For Paul Irons and his business partner and sister Marseah “Marcy” Delatte, breaking ground just blocks from the house where they grew up wasn’t just a homecoming. It was a family affair.

On a section of formerly-vacant land in New Orleans’ 17th Ward, Irons and Delatte were joined by their 85-year-old father and their children to start construction on Grove Place, 32 affordable rental homes catering to households earning 20 to 60 percent of the area median income.

“We’re talking about permanent affordable housing,” said New Orleans Mayor LaToya Cantrell at the July groundbreaking. Mayor Cantrell has known Irons and Delatte since she was a city councilor and always knew they had a commitment to strengthening their city and their community.

“They would not take no for an answer. They knew they could get it done.”

But the road to this multi-generational groundbreaking involved a good amount of rejection. Irons and Delatte’s firm, New Orleans Restoration Properties, has been developing homes across New Orleans for years. They’re from a dynasty of local real estate professionals; their grandfather was one of the first Black property developers in the neighborhood. But for Grove Place, their experience didn’t translate into a loan. Initially, most banks turned them down for financing.

“You have to have a million dollars of liquidity and five million dollars in assets,” Irons said. Indeed, liquidity requirements and a lack of multi-generational wealth are key obstacles to developers of color not just in New Orleans but nationwide. Just two percent of real estate businesses are run by people of color.

It’s that very need that we at Enterprise Community Partners are responding to with Equitable Path Forward, a multi-year initiative leveraging $3.5 billion to invest in Black, Latino, Indigenous, and other developers of color. Not only are we providing a $6.7 million Low-Income Housing Tax Credit package for Grove Place; we’re also providing backup loans to strengthen New Orleans Restoration Properties’ balance sheet, as well as a $300,000 predevelopment loan from Enterprise's community development financial institution.

“We’re especially proud to be supporting their first project of this scale,” said Michelle Whetten, Enterprise’s vice president and market leader for the Gulf Coast. “That’s possible because of their track record of high-quality development at a smaller scale and because of a new Enterprise initiative that recognizes that the affordable housing system makes it difficult for BIPOC and Black developers in particular to break into this business.”

“Their experience and track record are assets,” she said.

While they’ve never tackled a project quite this large, Irons and Delatte say Grove Place is the culmination of years of work restoring and building high-quality housing across New Orleans, from the Central Business District to Tremé.

“We wanted to build something on the same level of quality as market-rate homes,” said Irons. And indeed, the development will preserve a row of “doubles” built in the 1940s, and the combination of homes and community space will meet Enterprise’s Green Communities building standards for homes that are both affordable and environmentally-sound.

Enterprise is no stranger to this corner of New Orleans. After Hurricane Katrina in 2005, the 17th Street Canal in Hollygrove overflowed, submerging this historic Black-majority neighborhood. Responding to the needs of the community, Enterprise broke ground on one of its first New Orleans properties in Hollygrove in 2007: Wisdom Manor, a 30-home building serving low-income seniors.

Using a walker but with a shovel in his hand, Delatte and Irons’ father joined them to dig the foundations of Grove Place, alongside Irons’ three young sons and Delatte’s grown son who is now part of the family business. Delatte says Grove Place will be part of her and her family’s legacy: a commitment to their children and their community.